I made a Wee Faerie! And it Sparked Some Thoughts About the Toy Industry in the US.

I'm supposed to be preparing for the craft show next Saturday (Second Saturday at the Foundry. Come on out! It's really neat!), working on some gifts and stuff for the Etsy shop (hey, did I mention it's Free Shipping Month?  Enter Coupon Code August2013 for free US shipping and reduced international shipping rates!) but yesterday I was overtaken with the compulsion to knit this: 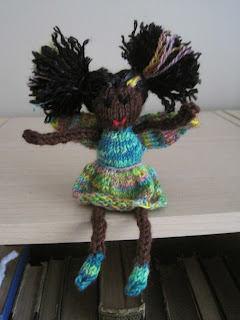 A little faerie!  The pattern is from Susan B. Anderson's Flora & Fairies that was in a holiday Knit Simple magazine a coworker gave me as a Christmas gift in 2011.  While normally knitting books or magazines with the word "simple" in them do not appeal to me (I want a bit more of a challenge), this one actually has several patterns in it that I have already made including little mitten and sweater ornaments and a holiday garland with little birds on it that I put up in my living room every year and hang my Christmas cards from it.  And this pattern was in it, too.

If you are not familiar with Susan B. Anderson, let me introduce you.  You can thank me later.  She is a designer for children and makes the cutest toys and clothing for kids you have ever seen. She may be my absolute favourite designer for toys.  I own her must have book "Itty Bitty Toys" and have knit about half the book so far with plans to knit pretty much every pattern in it.  I often check her blog and the many (free!) patterns she has designed for the Spud & Chloe blog.

But back to my faerie.  It's a simple, tiny pattern that took me about a day to make and used bits of sock yarn I had in my stash (most of it hand dyed by me. Her skirt/wing yarn was hand dyed by someone else.) Her little i-cord arms and legs took no time at all and I knit them directly onto her body by just picking up 3 stitches where I wanted them to go and starting my i-cord instead of making them separate and stitching them on. I love to save piecing together at the end.

The thing that took the longest was the hair. You have to tie each strand on around her scalp, which takes time, but then, because I wanted her hair to be curly, I went back and separated each strand into 2 pieces with a crochet hook. I adore how it turned out. Her pigtails are VERY Sera and I feel like she has so much personality. Too bad she's too young for this toy and it's going to sit around for a couple years until she's old enough not to eat the hair.  Sometimes you just have to give into the little voice in your head saying "KNIT THIS!" even when it's not sensible.

The fairies in the pattern are all white with blonde hair (well, the ones that have hair and not little flower hats.)  I really want to make toys that look like my niece.  So it was important to me to make an African American looking faerie.  Even as a small blonde haired blue eyed (BHBE) child, I noticed that most dolls and toys were BHBE like me and that any doll that wasn't blonde was relegated to the sidelines. Barbie's non-blonde friends (do you remember any of their names? Because I don't!), She Ra's one African American looking friend who only shows up in occasional story lines, Rainbow Brite's one non-white friend (wasn't she Indigo?)  I understood the idea that toy makers were throwing at me at a very young age: that Barbie's other friends weren't as pretty or important because they weren't blonde.  And that didn't make me feel good about being lucky enough to be born BHBE. It made me feel a bit guilty and ashamed.  My favourite Barbie growing up was Island Barbie, because she had the beautiful long black hair and golden brown skin of the Chamorro women I grew up around. I hardly every played with my blonde Barbie.  She wasn't as pretty in my mind.

So, it's important to me that my nieces have toys that aren't just BHBE.  I want my niece Sera to have toys that look like her, but that also look like the people around her. And so that's why I have plans to make a blonde "me" faerie and an Asian looking " Mommy" faerie.  I won't just do this for Sera, I want Katie (who is a blonde baby with hazel eyes like her mommy) to have dolls and toys that reflect the wonderful variety of people around her.  I don't want her to ever feel guilty for being blonde,  just as I never want Sera to feel bad because she isn't. We can't change how we are born. But we can change the idea that BHBE is the "best" way to be by teaching our daughters that everyone is beautiful and that differences should be celebrated.  Who knew knitting a simple toy could have so much power and potential?


May you always get gauge,