Have you ever gotten obsessed with a knitting project? I mean REALLY obsessed.  I mean, before you even start knitting you're thinking about how much you want to knit it and can't enjoy the other projects you're working on.  And when you finally do start it, it's all you want to do.  When you aren't knitting it, you wish you were.  When you are, you don't want to stop.  Not for anything: food, potty breaks, sleep, work.  You just want to keep knitting until you're done.  THAT obsessed.  Been there?

That's how I've been with the socks I'm working on.  The pattern is Knotty, a fun sock pattern that looks like a gnarled tree trunk.  The yarn is Noro Kureyon Sock which I just now learned is discontinued in the US, which makes me very sad. The pattern has been in my Ravelry queue for nearly 3 years, I bought the yarn over 2 years ago specifically for this pattern.  I thought the earthy greens and browns would fit the pattern nicely.  I decided that THIS year I was finally going to knit these socks.  I moved it to #1 in my queue. I told myself I could start it just as soon as I finished the hat I'm knitting for myself, but as the hat ended up needing another pattern repeat and I had to rip back, the need, the hunger to knit these socks grew.  Finally, I could take it no longer.

On the 3rd I cast on.  I've been using the socks as a reward system:  Do a half hour on the elliptical, get to knit 2 rounds.  Post a new yarn on Etsy, get to knit 2 rounds.  That sort of thing.  It was working at first, but the problem I had was 2 fold:  First, the pattern has a lot of easy repeats that increase and decrease to make the knots in the leg.  It's hard not to keep going until you finish a repeat.  And then there's the yarn:  the wonderful lovely colour changes want you to keep going and going just to see what happens next.  I pretty much have stopped knitting anything else, except my daily hexipuffs and the Nutkin socks I keep at my desk at work to knit on my lunch breaks.  And for those of you who know me know that I'm a NOT a monogamous knitter.  I usually have at least 7 projects on the needles.  So the fact that this is the ONLY thing I've been knitting tells you that it's beyond obsession.  The worst bit is that, to get gauge, I am knitting them on 00's!!!  Have you ever knit socks on 00's?  Teeny tiny little needles I'm terrified of breaking!  It makes my hands hurt after a half an hour or so.  But, the obsession is so bad that I'll carry on, no matter how my hands cramp and ache.  And, all my hard work and late nights have paid off.  I've finished the first sock! 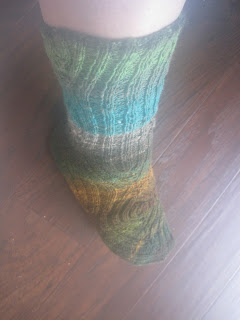 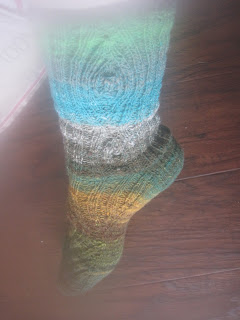 Isn't it fun?  I absolutely love it and I can't wait to start the next one and see how it turns out.  Do you like the nice soft filter on my pictures?  That's because I accidentally left my camera in my car overnight and the lens fogged up.  :)

Finishing the first sock has helped with the obsession.  It's more of a low boil than a raging fire.  I might try picking up my Cloudy Day beret that I am so close to finishing.  Or working on one of the 500 other projects in my oversized knitting bag.  Or maybe I'll just cast on the second sock...